In a nutshell, the two most common types of twins are identical and fraternal. Sometimes there are obvious ways to tell which type is what, but there are some complexities with determining the zygosity of same-sex twins - let's get into it.

The most common types of twins are fraternal twins and identical twins. There are other types of unusual and atpyical twins such as chimaeric twins, mirror image twins, polar body twins, fetus papyraceus and more! Check out this article written by our Patron, Professor Mark Umstad, on some of the rarer types of twins.

The science of fraternal twinning

We know that a pregnancy starts when a sperm fertilises an egg. The fertilised egg is called a zygote. Occasionally, a woman’s ovaries release more than one egg, and when two of those separate eggs are fertilised by two separate sperm, twins are formed. These twins are called fraternal twins, dizygotic twins (meaning two zygotes) or non-identical twins.

The science of identical twinning

We know that a pregnancy starts when a sperm fertilises an egg and that the fertilised egg is called a zygote. When one egg is fertilised by one sperm and then splits, twins are formed (sometimes the egg even splits into three, forming identical triplets!). These twins or multiples are called identical twins / triplets or monozygotic twins / triplets (meaning one zygote).

In the traditional model of twinning, the timing of splitting of a monozygotic embryo determines the number of placentas and amniotic sacs.

This complexity with egg split timing is why it can be tricky to determine zygosity of twins while they're still in the womb, and why health professionals can still get it wrong and inform their patients that they are having dizygotic, fraternal twins! The only way to be sure on identical vs fraternal is to conduct a genetic test on your multiples (or risk your family and friends telling you for years "but they look the same!").

The genetics of twin types

The genetics of twin types

There is a lot of information to take in when you're reading about twins and multiples.

Medical terms, common names, how many eggs and sperm cause what types of twinning, genetic (DNA) similarity, whether there's a hereditary predisposition that results in twinning, what impact fertility treatment has on twinning and the likelihood of birth defects.

Take a moment to reference this summary matrix that spells it all out. 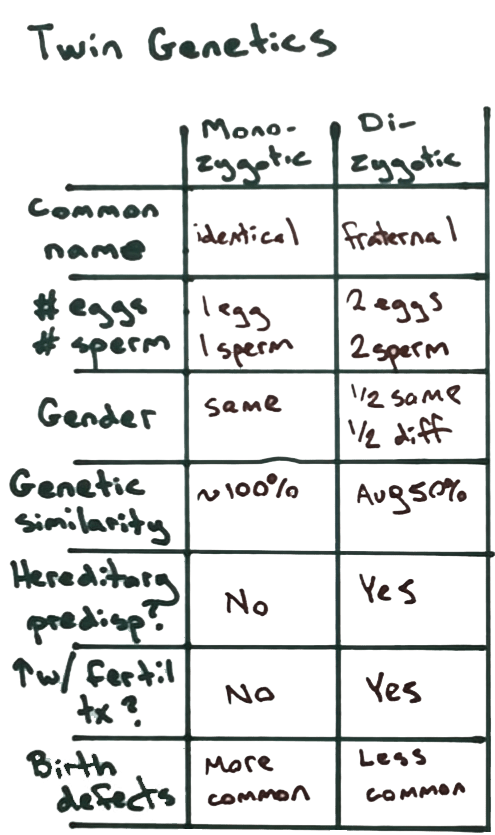 What is zygosity and why do I need to know about it?

Quite often, parents are misinformed during pregnancy and at birth regarding their children's zygosity because prenatal scans that display one or two placentas are not a reliable means of determining whether twins are identical or not (please read this research piece for more information).

Why do I need to know?

Identical twins are more likely than fraternal twins to get the same illness. If one of a pair of identical twins is diagnosed with a particular disease or health condition, like high blood pressure, the other twin should be checked for early symptoms.

Because of their genetic make-up, identical twins will always be compatible for organ transplantation, if they ever need it. Fraternal twins are compatible only some of the time.

To find out whether twins are identical or fraternal, you can ask for a genetic test after your babies are born. This is called a zygosity test. The test doesn’t hurt and involves collecting a sample of cheek cells by rubbing the inside of your babies’ cheeks with a soft applicator (like a cotton bud).

There are some myths that exist around twin zygosity. Let's bust them!

Read more about zygosity on the Twins Research Australia website.

Back to Frequently Asked Questions FAQ