AMBA launches annual Multiple Birth Awareness Week as a national campaign to raise awareness around, and draw attention to, the unique realities for multiple birth families in Australia - and how advocacy, positive education and engaged communities can contribute to enabling positive health outcomes for families with multiples.

The Australian Multiple Birth Association (AMBA) has announced the theme for this year’s Multiple Birth Awareness Week (MBAW), running from 21st to 28th March 2021. The annual week-long event centres around running community events and an online social media campaign to raise awareness of the education and advocacy work done by AMBA nationally as well as the grassroots programs provided by local member-clubs. 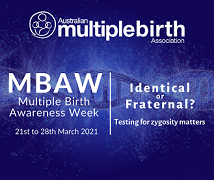 The theme for Multiple Birth Awareness Week (MBAW) 2021 is “Identical or Fraternal? Testing for zygosity matters”

The goal for MBAW 2021 is to drive awareness around a misconception when it comes to determining zygosity of multiple birth children. Zygosity refers to the degree of genetic similarity within each pair of twins; in other words, how similar their DNA is.

AMBA prefers to use inclusive language and will always refer to multiples, not just twins, to ensure that our higher order multiple (HOM) families are included in our messaging. Higher order multiples are triplets, quads and more. However, because higher order multiples will almost always include at least a set of twins, we have used the term twins when referring to the science and genetics of twinning. Identical HOM's are incredibly rare, and with HOM's representing approximately 2% of the multiple birth statistics in Australia (so that's 2% of 1.4%), identical HOM's are significantly less.

The Australian research study that we reference throughout our campaign was specifically conducted using twins, so that also contributes to the choice of language. It can be tricky to determine the language to use, but our aim was to ensure that our campaign focused on educating our audience. With a topic like zygosity the message is clearer when referring to the genetics and science of twinning.

The basics of twin types

In a nutshell, the two most common types of twins are identical and fraternal. Sometimes there are obvious ways to tell which type is what, but there are some complexities with determining the zygosity of same-sex twins.

One of the most common questions asked of a multiple birth family is “are they identical or fraternal?” It seems like an innocent enough question, and the answer has often been based on using the number of placentas as a reference, but quite often, parents are misinformed during pregnancy and at birth regarding their children's zygosity because prenatal scans that display one or two placentas are not a reliable means of determining whether twins are identical or not.

If twins are the same sex and each have a placenta, or if there is doubt about the type of placenta, they could be identical - or non-identical twins. The best way to be certain is to do a zygosity test. Testing zygosity provides scientific evidence to determine whether twins, triplets or quadruplets, etc. are identical (monozygotic or MZ) or non-identical (dizygotic or DZ) and identifies the type of cell union that occurred at the time of conception.

A study conducted by Twins Research Australia in April 2013 aimed to explore and quantify understanding and assumptions about zygosity using twins. The qualitative analysis on 121 twin pairs recruited into the study shows that the most common reason for zygosity assumptions was based on observations of the twins, based mainly on physical or behavioral differences or similarities; for example, ‘our girls look very alike’, ‘my twin sister and I do not look exactly the same’, and ‘both boys have autism’. The other common answer was based on medical advice; for example, ‘I was told that they were not identical because there were two placentas’.

“Research studies are vital to our mission, as they provide the evidence needed for AMBA to advocate for change on behalf of multiple birth families.”
Ashlee Tenberge, AMBA Chairperson

“Accurate zygosity testing has the potential for significant positive impacts on multiples and their families and is a minimum right that should be provided to same-sex twins.”

Zygosity is important to know

But why does it matter? Why does zygosity need to be determined at all? Identical twins are more likely than fraternal twins to get the same illness. If one of a pair of identical twins is diagnosed with a particular disease or health condition, like high blood pressure, the other twin should be checked for early symptoms. Because of their genetic make-up, identical twins will always be compatible for organ transplantation, if they ever need it. Fraternal twins are compatible only some of the time.

Health issues aside, the research study shows that most participants were curious to know their true zygosity because the result would bring them certainty and a sense of identity. Others wanted to know for health reasons, to provide information in the context of family history, or to counteract what they believed to be misinformation.

“Anecdotally, zygosity testing is still at low rates amongst parents of multiples. Children have a right to know their results for reasons ranging from health to identity.”
Ashlee Tenberge, AMBA Chairperson

Read more about types of twins and zygosity

Download the discussion paper on the importance of zygosity knowledge (2020) 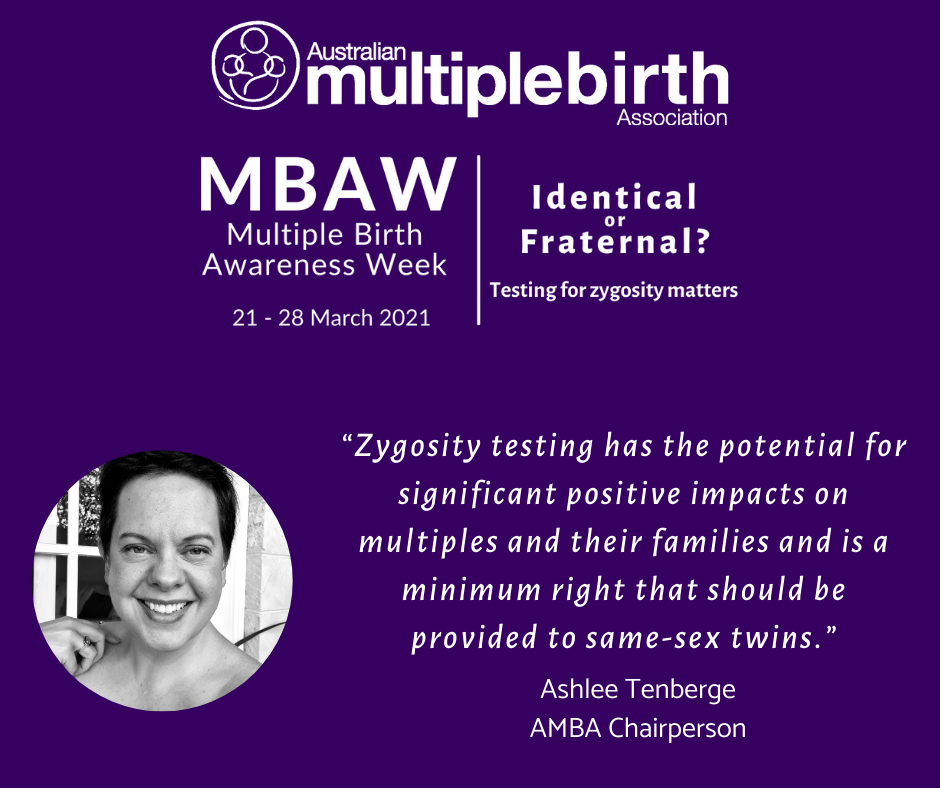 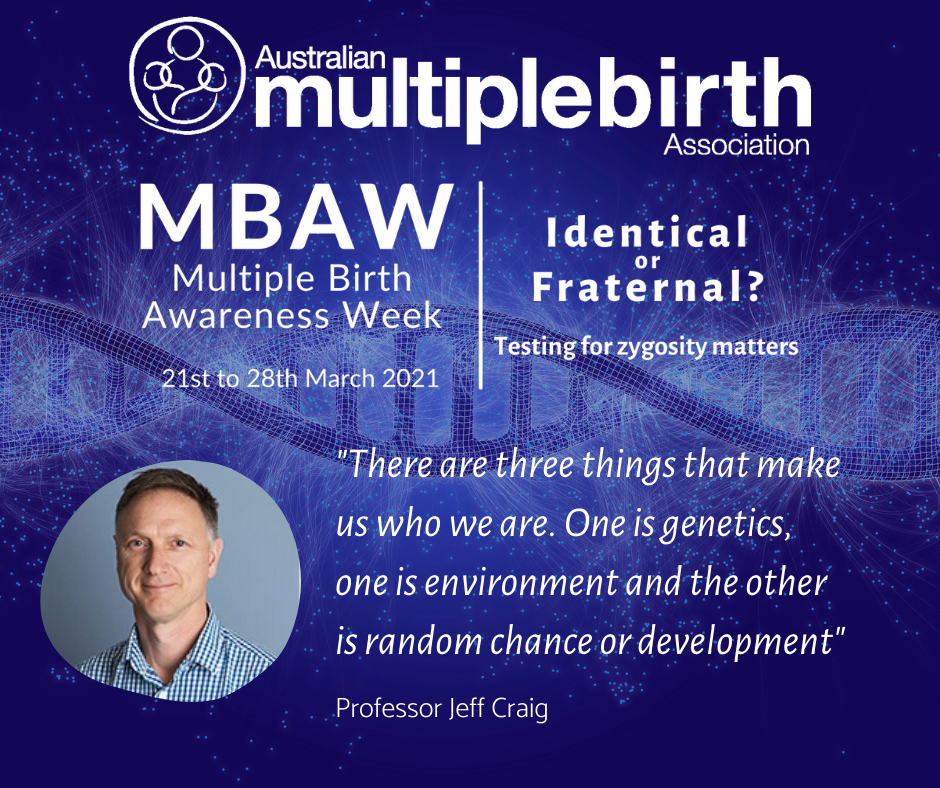 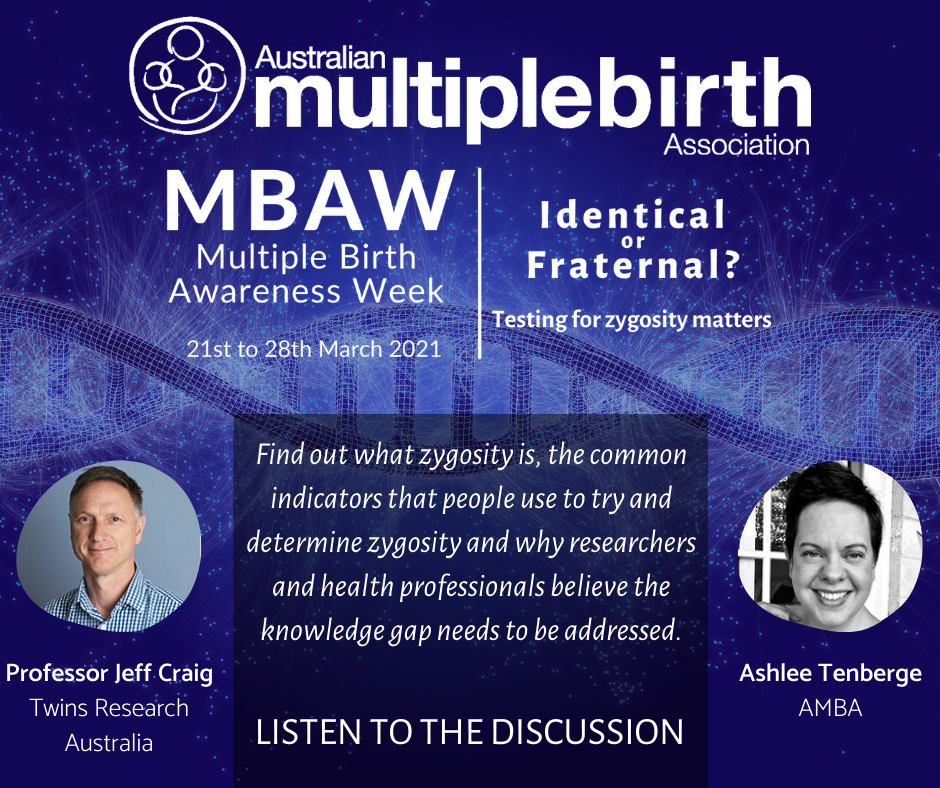 Watch the recording with Jeff and Ashlee